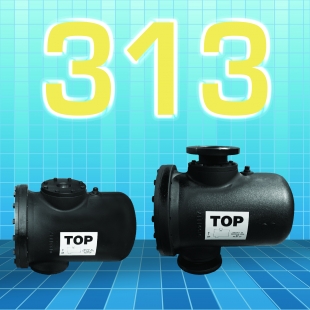 Tuesday, November 23rd, 2021
HISTORY:
The 313 overflow trap has been around for five decades or more. In its early years, the tank was fabricated by craftsmen at Warren Controls using cut pipe and welding fabrication to create the tanks one at a time.

A little over 20 years ago we approached Manchester Tank to make these tank assemblies for us. The internal, 2-stage piloted float valve assembly was still of our own design and manufacture as we final assembly. Manchester Tank has been one of the largest tank manufacturers in the US and they were able to provide a cost reduction for us using a process they had available to them that used roll-formed sheet steel that was then seam welded to create the main circumference area of the tank. This turned out to be a cost reduction over the cut pipe. A few years back, Manchester notified us they were going to be shuttering this special plant they had that did our tank production. We searched but could find no other similar vendor. We had no choice but to, in the interim, seek out a vendor that could create our tanks using the older cut pipe fabrication method. We found this vendor and their quality has been outstanding, but pricing has been far less than ideal, prices kept increasing as we continued on and the ability to keep up with our demand remained a challenge.

Required Changes for Cost Reduction and Demand Requirements:
As a result of all this, during the pandemic, we chose to redesign our 313 tanks as cast tanks, using grey, cast iron. While these tanks are heavier, the overall cost is less than the most recent tanks we have been procuring. We have begun with this tank switchover in Q4/21 with the 2" and 3" sizes (including 1 1/2") and will be switching over to the 1" tank at the end of January followed by the 4" tank for later in Q1/22. The 6" tank is a lower volume items and we will continue making it the way we have for the last few years.

Meanwhile, realize that the main part of the 313, the 2-stage pilot-operated float valve assembly remains the same. Repair kits, while they may be renumerated to accommodate additional gaskets for different tanks, will largely be the same. For the changes the benefits are, for the 1"-4" sized 313 Overflow Traps, 2022 January pricing will be at a 10% price drop from our most recent published list prices. Unfortunately, for the 6" size, the 2022 January List price will be 10% higher than the most recently published list price.
The new 313 Overflow Trap IOM is now available for download: HERE

Theory of Operation:
The 313 Overflow Trap acts as a giant steam trap for DA tanks or any large tank with a steam blanket. The trap is connected via an overflow line from above the waterline of the tank, within the steam blanket layer. Its main job is to accommodate overflow from the water that is filled into the DA Tank. Should that fill valve stick open, or otherwise overfill beyond water usage, water will reach the overflow line and go down to the Overflow trap, and eventually to the drain. The valve inside the 313 is a 2-stage float valve. Under an overflow condition, the DA tank fills fast enough to allow water to reach and go down the overflow line, filling the 313-tank and causing the float to kick the valve open directly to its secondary stage. If sized properly, the 313 will be able to drain faster than the fill valve on the DA tank can deliver water. Under normal operation, there is simply condensate that forms inside the overflow line causing the 313-tank to fill very slowly, perhaps only 1" water level per hour. This is accommodated by the first, pilot stage of the float valve, which allows the water to drain out of the 313 tank at a trickle. All the while, the 313 tank water level remains above the valve, trapping the steam from escaping.